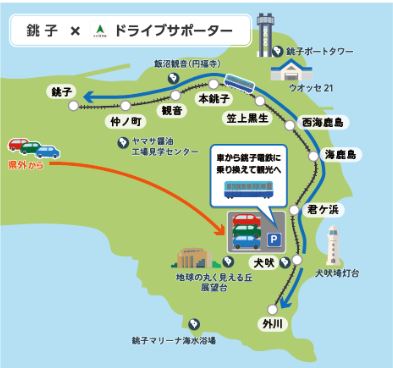 NAVITIME Japan, Choshi City of Chiba Prefecture, Choshi Electric Railway and KDDI are jointly performing a demonstration test for tourism-oriented MaaS to attract tourists from outside of Chiba.

Choshi Electric Railway give one-day free-ride pass to a driver goes to Inubosaki Station on Choshi Railway after driving 96 km or longer. The one-day pass includes discounted tickets for tourist spots along the railway. The demonstration target is to boost park & ride, in which a driver parks a car at a station and get on a train to enjoy railway travel.

Also, the demonstration test contains GPS-based ‘Check-in Rally’ at six checkpoints in Choshi City, preparing special gift for completion. ‘Tourist Guide Mode’ provides a variety of tourist information, such as recommended drive routes or local events, and coupons of shops along the railway.