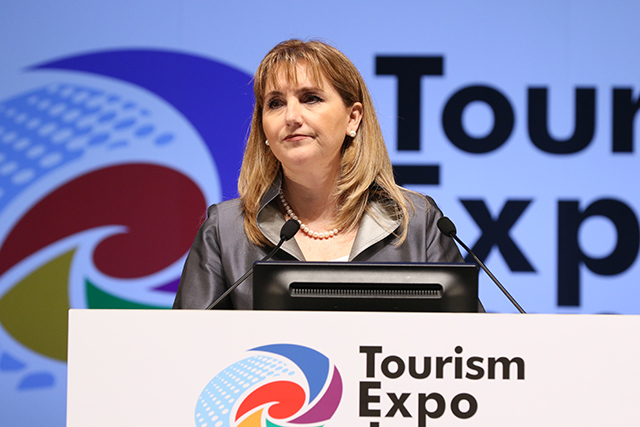 The 5thTourism EXPO Japan 2018 was held for four days from September 20 t0 23, out of which 20 and 21 were trading days including international conferences joined by world’s tourism leaders as well as B2B appointment sessions between sellers and buyers.

A main theme of this year’s event was ‘Managing Sustainable Tourism for Community Development,’ particularly paying attention to overcrowding tourism, in which a variety of problems are caused by too many tourists in a particular destination.

The UNWTO statistics show that overseas travelers totaled 1.3 billion worldwide in 2017, and the number is expected to reach 1.8 billion in 2030. Also, IATA has forecasted air passengers will double to 7.8 billion in the next 20 years.

Pololikashvili picked up promotion of smart tourism through investments in innovation and technology as one of concrete actions to address upcoming issues in social, cultural and environmental aspects. In addition, he said, “We must support investment in small and medium-sized enterprises and entrepreneurs, who are our leading innovators and job creators.”

Pointing out that travelers’ backgrounds are diversified in accordance with an increase in overseas travel population in the world, Pololikashvili said that it is a ‘Hyper Connect’ time with unprecedented expansion of communication methods, so it is important to establish closer partnerships between travelers and destinations, between a central government and local governments and between public and private sectors. Manzo introduced that the WTTC has set three priorities to maximize the opportunity of growth: security, crisis preparedness and sustainable growth, referring to more serious overcrowding or over-tourism issue than before.

Based on a report by WTTC and McKinsey, Manzo tressed that what must be required is to draw up a long-term sustainable growth strategythrough rigorous long-term planning, involve all sections of society (public, private and community) and find new sources of funding.

Following the keynote speeches, the Ministerial Round Table, joined by 12 countries’ tourism ministers, also shared case studies to address the overcrowding problems in Philippines and Bhutan. the Ministerial Round Table, joined by 12 countries’ tourism ministers