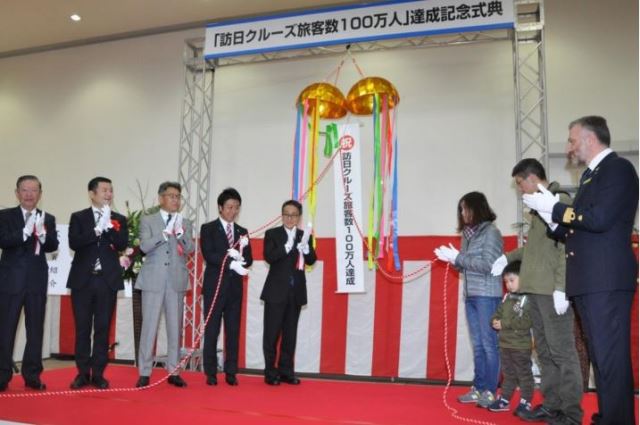 Foreign visitors to Japan on cruise ships reached 1 million a year on December 8 2015, when a family from Hangzhou on Costa Costa Serena operated by Italy-based Costa Cruise arrived in Hakata Port. The 1 millionth family was celebrated by Ministry of Land, Infrastructure, Transport and Tourism and Fukuoka Prefecture.

Doubling from about 420,000 foreign visitors to Japan on cruise ships in 2014, the milestone was achieved five years earlier than the government’s initial goal. The ministry has developed quays to receive more cruise ships. Port calls at Hanaka Port largely increased from 99 in 2014 to 250 already in 2015, and the port welcomed about 500,000 foreign visitors, almost half of the total, according to Fukuoka Prefecture.

A main reason for the big growth is that the new Cruise Center opened in 2015. The prefecture is trying to develop environments for both hardware and software hospitalities not to give stresses to both local residents and cruise travelers.